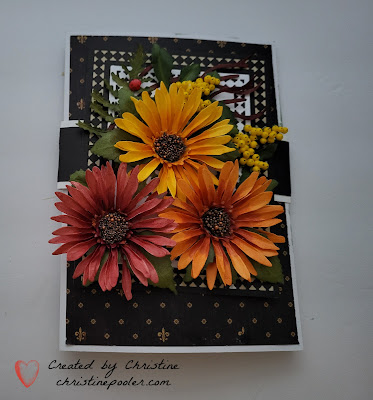 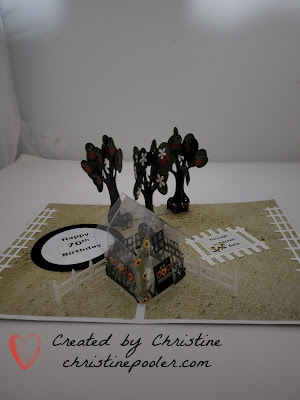 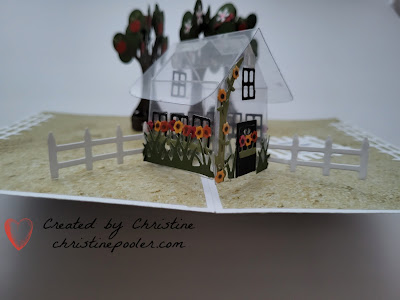 Hello my crafty friends,
My card today was originally created for a dear sweet friend that turned 70 but it now has taken on a second meaning.  With all that is happening in Europe the sunflowers are in support of Ukraine.
You know I never ever post politics or religion but today I ask everyone to pray for Ukraine that there is a speedy end to this heinous act on those poor people they don't deserve this.
As I said it started as a 70th Birthday card for a dear friend and she works at a greenhouse so I created a pop up greenhouse scene for the inside.  I had seen cards done by Sue Stutzman on Karen Burniston Pop Up Facebook page that is where I got my inspiration.  Of course being on Susan's Garden Club DT at Spellbinders I had to include some of  Susan's flowers and her new release Garden Favorites has the new Sunflower die set (this set includes a die for her ladybugs as well).
My card is 5" X 7" white 110# cardstock. (wanted to make sure to have room for several trees and the greenhouse).
Patterned paper was cut 4-3/4" X 6-3/4" and adhered to front and back of card base using Clear Double Sided Adhesive.
Belly band for holding card closed and also for bouquet was created from a strip of white cardstock 12" by 2" and a strip of matching patterned paper 12" X 1-3/4" attaching the patterned strip to white strip using Clear Double Sided Adhesive.
Rectangle was cut from black cardstock using Spellbinders Candlewick Rectangles.  Coordinating cardstock was cut in plain rectangle to fit behind decorative one adhered to back of decorative rectangle using clear drying glue (I have used Dries Clear Art Glitter Glue).  Another smaller decorative rectangle was cut from white cardstock and adhered in same manner.
Sunflowers  (3) were cut from Susan's Garden Specialty Paper using her new Sunflower die in her new release Garden Favorites from Spellbinders.  For the leaves I do use green cardstock then shaded with inks and PanPastels. The flowers were then colored with Copic markers shaped using Susan's Garden Deluxe Tool Kit and assembled using Kids Choice Glue.  Susan has YouTube on creating the Sunflower which you can find here.

Using Winter Bough from the Winter Bough & Evergreen Shrubs die set (Holiday Winter Flora Release) I cut 2 from medium brown cardstock then colored with a dark red Copic marker.
Using Winterberry & Mistletoe set from Holiday Winter Flora Release I cut 2 Winterberry Branches and Leaves from green cardstock.  Colored styrofoam beads yellow and let them dry.  Once dry I added black dots using Copic marker and attached to branches using Kids Choice Glue building them up on branches to resemble Pyracantha berries.  I shaded and shaped some leaves as well.
Using the Ostrich Fern die from Spring Flora Release I cut 2 from green cardstock shaded and shaped.
Using Kids Choice Glue I assemble my bouquet on the Rectangle starting with the branches, ferns and then sunflowers and berries.
Inside card
I followed Karen Burniston's instructional video for the Tiny House found here.  I used clear cardstock but if I do again I will do as Sue Stutzman did and cut from 100# cardstock then cut openings and back with clear.  Clear cardstock is just a bit more difficult to work with.  I used the flowers, flower boxes, windows and door to decorate.  Most was cut from colored cardstock that was backed with Clear Double Sided Adhesive.
Tiny Tree Pop Up was used created 3 trees decorated 2 with apples from Tree Fruit die set and 1 with flowers from Tiny House die set.
Signs were printed  on computer and die cut.  The little fences were from Farm Edge Set and the bigger fence holding sign was something from my stash.
Crosshatch Circles were used for the Happy Birthday.
Once interior was completed I wrapped band around outside of card making sure it would slide easily off the card and adhered band's overlap.  Finally I adhered the rectangle with bouquet to band center with Kids Choice Glue.
Thank you for stopping by today and I hope you have enjoyed my card.  I have linked many of my supplies below which you can click on and go to site to purchase.
Until next time - Happy Crafting - and please pray for the people of Ukraine it is so scary.
Christine
You only live once but if you live right once is enough!
Unknown 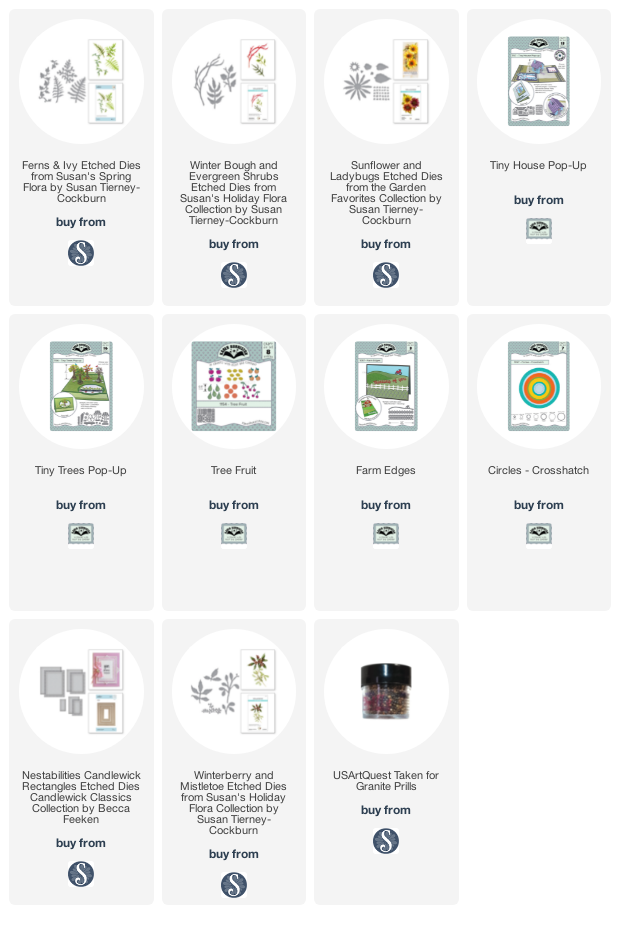 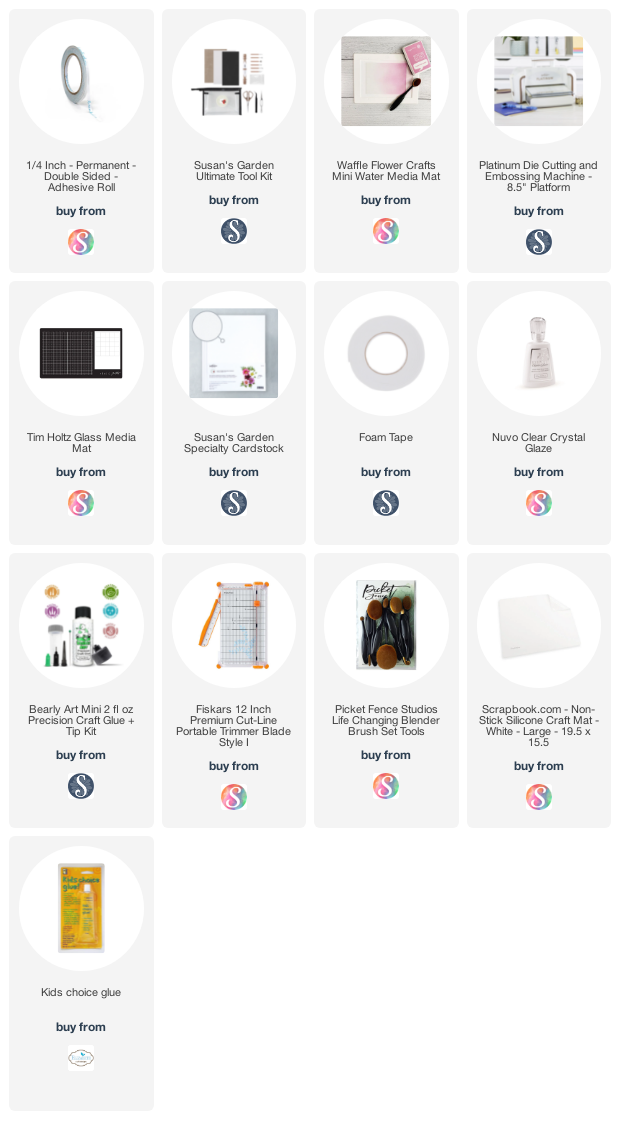 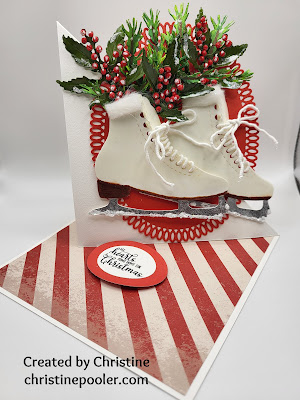 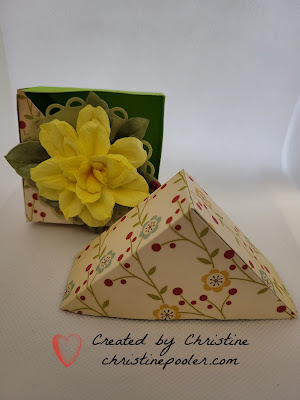