Home of the Free 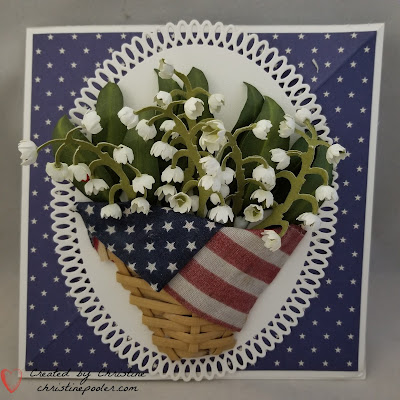 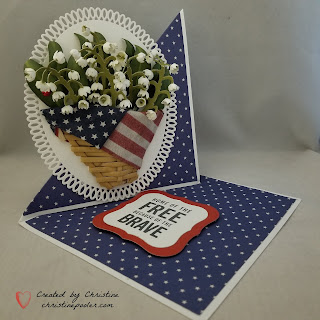 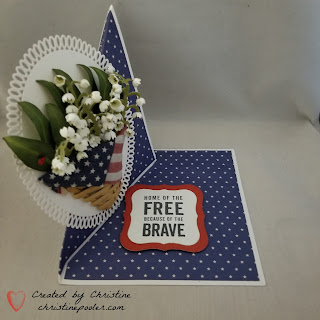 Hello my creative friends,
Today I have a card I created in honor of all those men and women gave their lives for our freedom.
My card is a twisted easel with Spellbinders Petite Picot Oval and a basket full of Susan's Garden Club Lily of the Valley from her Spring Floral release.  I wove a small basket from some leftover chair caning that I had and used a small flag removed from a stick and folded to fit basket rim.
Susan's Lily of the Valley was cut 5 times shaped and assembled using Susan's Specialty Cardstock.  Leaves were cut from green cardstock 5 times giving you 10 leaves.  They were shaded and shaped using Susan's Deluxe Tool Set.
Card base was 6" X 6" with front panel scored diagonally fold on score line into mountain fold.  Patterned paper was cut 5-3/4" square adhered to inside of card and card front using clear double sided adhesive.  On front panel I made sure to put adhesive on each side of diagonal score line as close as possible without going over score line.  Add the patterned paper work the diagonal fold burnishing it well.
The oval was the largest in the Petite Picot Oval set cut from white cardstock and adhered to lower half of card front using clear double sided adhesive.
Basket was adhered to oval using Kids Choice Glue holding it until sets up.  Lily of the Valley leaves were added to basket using Kids Choice Glue then the Lily of the Valley Stems.  Lady bug was added.
For the easel stop on inside sentiment was stamped on white card stock using black Momento ink  then die cut.  From red cardstock next size large die was cut to make a mat for sentiment.  Dimensional tape was used to adhere to inside of card.
My inspiration picture 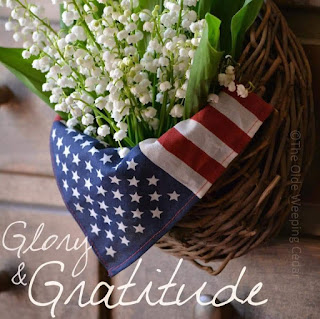 Thank you to all the Brave men and women that have fought for our freedom !!!
So hope that my card today has inspired you to go create - thanks for stopping by.
Until next time - Happy Crafting!
Christine
You only live once but if you live right once is enough!
Unknown 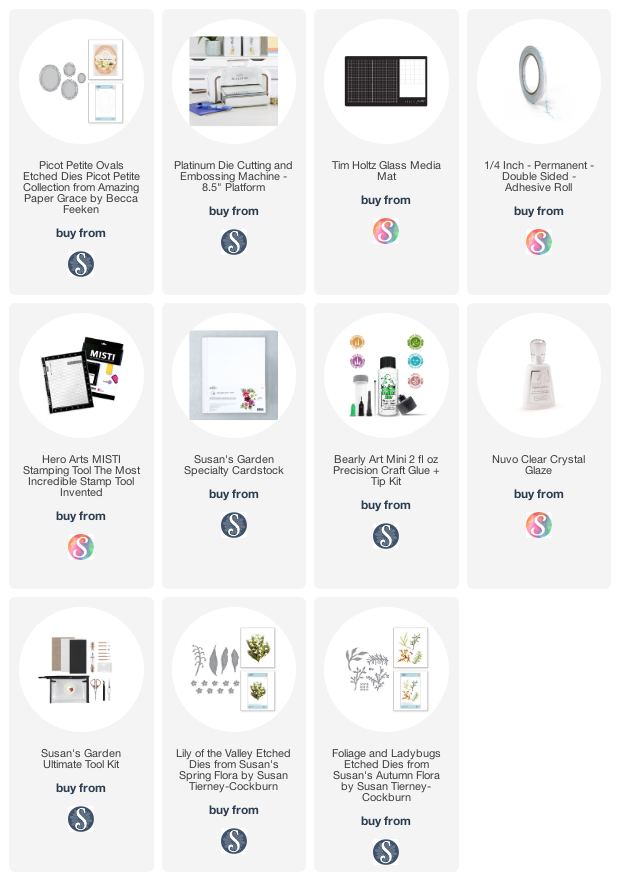 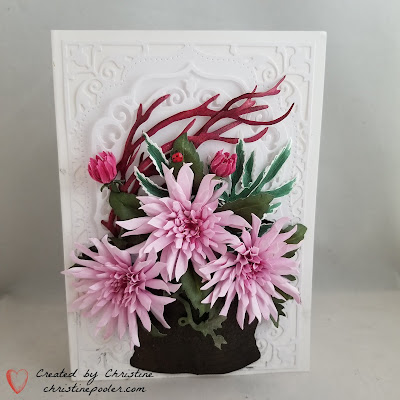 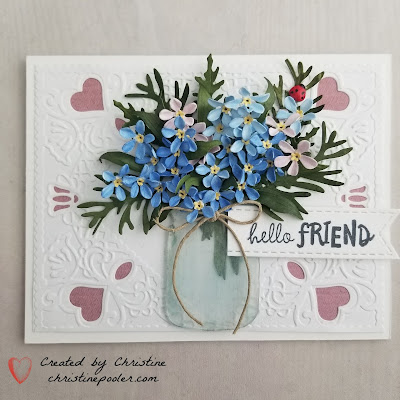 Welcome my crafty friends, Today I have for you a card I created for a friend from my childhood she use to come to stay with her Gram who lived up the street from us.  We haven't seen each other in at least 55- 60 years and recently met up - what fun it was to reminisce and catch up on each others lives. I used a retired Susan's Garden Forget Me Not die set and Spellbinders Susan's Garden Club Ferns die set.  The Ferns and Forget Me Nots were chosen for this card from one of our childhood memories in which we got into trouble for picking these items. Card is 4-1/2"X 5-3/4" White Cardstock was cut 4-1/4 X 5-1/2 Spellbinders Diamond Lace Frame Cut and Emboss was used on this piece.  Colored cardstock was cut just slightly smaller than embossed piece.  Attach to back of embossed piece using Bearly Art Glue.  Attach to card front using clear double sided adhesive. The mason jar was created from Shrinky Dink Film colored with Copic markers and shrunk in oven.  Bearly A
Read more